It does not matter if you are building a game, a real-time framework or a browser engine there are some common issues you have to deal with, like how to check regressions and how to run benchmark and tests on your graphics code.

Most, if not all, of the javascript 3D engines like A-Frame or three.js, just manually test before every release that nothing broke. As you can imagine that could help if there are some obvious performance or rendering issues but for trickier changes or bugs, it won't.

Of course you could always run the profiler to check the performance, but each browser provide its own custom solution and they are really not user friendly and they are also really hard to automate across different browsers and platforms. Specifially if you are working with standalone devices.

So I started working on a tool to improve this workflow. The basic idea is really simple: we just want to be able to execute an application or a test for a specific number of frame and measure how long it takes. So if you change the code in that application and it runs slower, you know that you got a regression in performance, if some frames differ from each others, you know you got a regression in the renderer.

The main point here is to be able to run them deterministically, and without modifying any of the actual code of the application.

So the complete list of requirements that I had to design the application were:

At the time I was working on this prototype I happened to meet Jukka Jylänki (formerly Mozilla Games team, currently Unity), who was working in a pretty much same approach as I was planning to do: emunittest. It was really useful to discuss ideas with him and to have access to his code, as my implementation started heavily based on his codebase. Although I slowly started diverging from his needs (focused by that time mainly in emscripten), for example, I got rid of all the python code in favor of node to keep the whole app in javascript, and I removed the need to modify the demos’ HTML so all the code is automatically injected by a proxy server.

The overall list of features currently supported by the application cover the requirements described in the previous section:

The tool will generate a JSON with all the data collected during the benchmarks/tests. On each JSON you will find the following format for each test executed.

It also provides an option to generate a report using multiple JSON files, grouping them for example by device, browser or file. 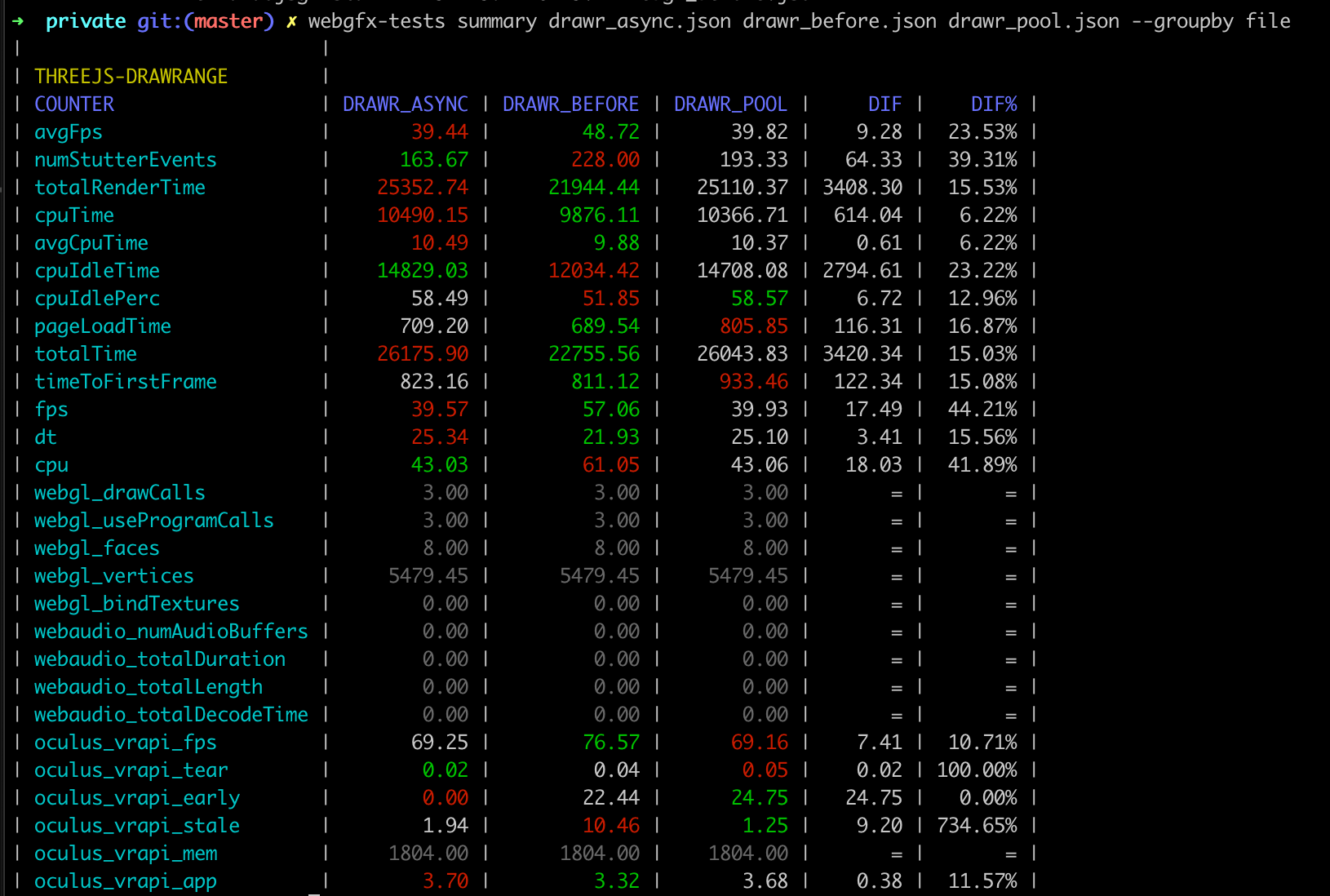 The tool had the option also to publish an HTML, easier to share and publish. 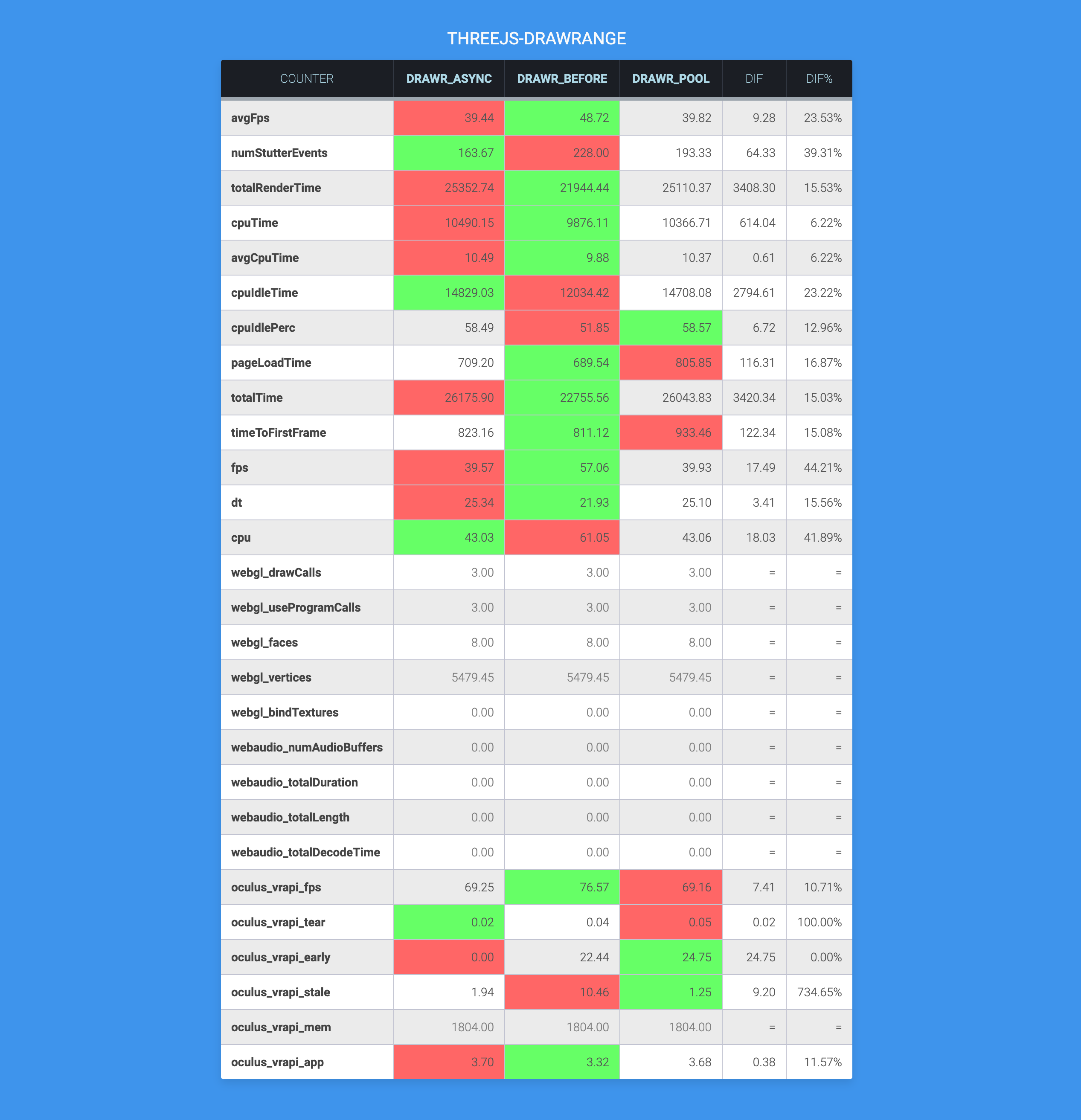 By default, the tool will compare the last frame with a reference image, and using a specific threshold that could be defined by test. But it could be possible to compare any other given frame number during the test execution.

One important feature to test interactive applications is the ability to record the user's input.

So I included the possibility to run the demo in record mode so it will be recording, per frame, every user input (mouse and keyboard, VR coming soon).

Once the recording mode ends you can decide if you want to use the recorded input and reference image for your next tests.

When replaying the input, I added also support for showing the key pressed for debugging (Using a library I created):

I did the same for the mouse recording, so you can see the cursor and also a circle indicating when the user clicks:

I worked with the Firefox Reality team to include a parameter when launching the browser activity (Using ADB) to disable the user gesture requirement to enter VR. With that flag enabled, I forced entering VR so we could test the VR mode without any user interaction.

I could make the controllers dissapear, move around programatically like you can see in the next video, or replaying a recorded movements.

I took a similar approach for the headset itself, ignoring the VR pose provided by the API and injecting my own custom one.

I was working on a database (MongoDB) to store all the information from the devices, browsers and tests results for every team member and devices we own. So we could easly check regressions in the project where we use this.